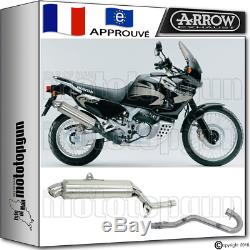 Honda xiv 750 africa twin-1997 Code: [+ 72639pd 72093pd]. Arrow Special hand was born in 1985 when Giorgio giannelli (a very good motocross driver) made his idea a reality: to create a company engaged in the production of high performance exhaust systems. The first products were designed for off-road motorcycles and soon the success of these items led to the start of production of a growing number of exhaust systems and other special parts. The accessories have been designed and developed also thanks to the very significant investment of Michele Rinaldi, while world champion 125 mx class. After a few seasons, the first world title comes, when the Belgian driver jobe won the world championship 500 mx class. Very soon, along with the range and exhaust? Accessories for motorcycles 2-stroke, a new line of exhaust systems for 4-stroke motorcycles is designed: when tested? Demanding rally Paris-Dakar, the exhausts were mounted on the winning Honda of stroke? The item \motorcycle \ parts \ exhaust systems \ silent, deflectors \The seller is \This article can be shipped worldwide.
discsexhaustdacarchainrd04hondablacksilenttwinwheelbrakediscoval90-92motoxrv750africaformirrorrd03transmissionarrowfrontmotorcycleforkmirrorsparisback68b407c7achillesmivvrd07pairbrembobefore